I have been following news reports of the above conference held more than a week back on the new directions that China may take in the financial sector.

That equates to 10-20 million people moving to the modern economy experiencing annual income growth of up to 400 per cent and contributing between eight to 20 percentage points to the growth rate of aggregate incomes.

The conference is held once every 5 years. A brief recount shows the signifcance.
The first conference was held in 1997, in the wake of the Asian financial crisis------  led to a plan to remove billions of dollars in bad debt from the balance sheets of the major banks.
The 2002 meeting led to hastening the reform of those banks----  resulted in the eventual overseas listing of Bank of China Ltd., Industrial & Commercial Bank of China Ltd. and China Construction Bank Corp.
The 3rd 2007 conference led to the establishment of China Investment Corp., the country's sovereign wealth fund.
From 2006 to 2011-------Banks's NPLs fell to 0.9 % (2011) from 7.1 % (2006);  Banks' overall CAR  increased to 12.3 & (as of Sept 30 2011)  from 7.3% (at the end of 2006).
Recent concluded 2012 Conference
One of the key outcomes of this conference could be the manner in which China policymakers will move towards allowing the free market to set interest rates.
Following three interest rate hikes in 2011, the one-year benchmark deposit rate stands at 3.5 percent, while the loan rate is 6.56 percent, yielding an interest margin of 3.06 percent. These rates are at the moment, all determined by the PBoC and are highly biased by giving a very good margin which is protective of the Big Banks.
That high margin did much to lift banks' total assets to 119 trillion yuan ($18.84 trillion) by the end of last year 2011.
How would China move towards market driven setting of interst rates?
Deposit Insurance
One proposal eyed is deposit insurance---- which would reduce potential default risks and help drive market-oriented interest rate reform for commercial banks.
Once bank interest rates can float freely on a market basis, the interest margin is expected to contract under competition, and it may shrink the bank's profits.
Bankruptcy is normal in a competitive situation, so an insurance system is necessary to protect depositors' assets.
Market forces are expected to play a more important role in fund allocation, and the government's role will be more clearly defined, Premier Wen Jiabao said on the Saturday after the end of the two-day National Financial Work Conference.

Benefit
Competition would also help SMEs who are the ones suffering most under the tight monetary policies ( after the series of RRR rises last year) get cheaper loans and increase their profit margins.

Looking at the CPI and PPI Plots U would have noted that China's CPI growth has somewhat moderated at 4.1% yoy , a 15mth low. The PPI plot shows an even more pronounced downward sloping trend for growth, suggesting a possible inprovement in the CPI if producer input price increase continues to abate.
Overall for the year ended 2011, CPI was up 5.4% vs 2010 says NBS.
Remember the CPI target  inflation rate set by Premier Wen was 4%. Many in the local provinces are feeling the pinch of the high inflation and remains high on the agenda of policymakers. 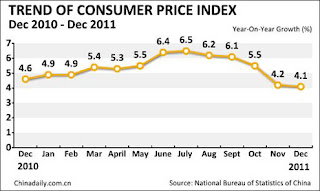 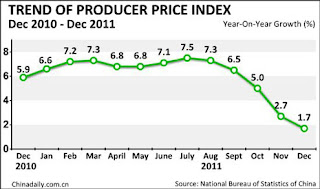 China's PPI
While the overall CP growth is somewhat moderating, food prices remains a prime concern as it forms a massive 1/3 of the CPI basket. Overall Food prices were up 9.1% yoy in Dec. That rise contributed 2.8 percentage points, or more than two-thirds of the general price increase. 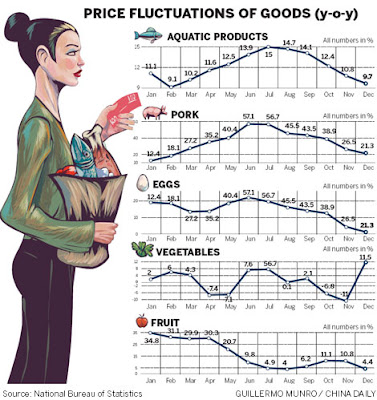 China's CPI  Food Components
All Graphics courtesy of China Daily
Food Prices are largely cost driven ----- dependent much on ﻿weather conditions (floods etc)  and the agricultural population. In other words supply rather than demand driven.
China policymakers must continue to have policies that favor the agricultural population and promote productivity in grain products as well as animal husbandry.
As China is at an early stage in the economic development path, food will constitute a big portion of the basket but will decline with urbanisation and accompanying income growth.
Lewis Point
Many economists believe China may have already crossed the so-called Lewis turning point, meaning that all excess rural labor has already been absorbed by urban areas and that structurally higher wages -- and inflation -- lay ahead.

Many provincial authorities have rushed to increase minimum wages, in line with central government plans to boost spending power and domestic consumption, despite warnings of tightening labor supply from factory bosses.

That equates to 10-20 million people moving to the modern economy experiencing annual income growth of up to 400 per cent and contributing between eight to 20 percentage points to the growth rate of aggregate incomes.

3) Forex Reserves
China's forex reserves unexpectedly declined ---- to $3.18 trillion, down $20.6 billion from the previous quarter.
In breakdown, PBoC data showed that foreign exchange reserves increased by $72.1 billion in October, but decreased by $52.9 billion and $39.76 billion respectively in November and December.


BEIJING - Foreign direct investment in China rose 9.7 per cent last year to a record US$116.0 billion, as Asian countries boosted spending despite the global economic turmoil, the government said on Wednesday.


But investment by overseas companies fell for a second straight month in December, down 12.7 per cent year on year to US$12.2 billion, as the worldwide slowdown began to take hold, the commerce ministry said in a statement.

The latest figures came a day after China said its economy expanded by 9.2 per cent last year, slowing from 2010, as global turbulence and efforts to tame high inflation put the brakes on growth.

Inward investment from US companies suffered the most in 2011, plunging 26.1 per cent to US$3.0 billion, while European investment registered a slight fall, down 3.65 per cent at US$6.4 billion.

Nonetheless, last year saw dramatically slower growth in foreign investment than 2010, when blistering economic growth and expectations for a stronger currency led to a 17.4 per cent surge in the flow of foreign money into China.

The commerce ministry also said the service sector overtook the manufacturing industry in attracting the most inward investment for the first time in 2011 with US$55.24 billion, up 20.5 per cent on 2010.

Foreign investment in the manufacturing sector rose by just 5.1 per cent year-on-year to US$52.1 billion.

'The whole world has reduced its interest in investment due to the flagging economic environment,' said Zhou Hao, economist for Australia and New Zealand Bank (China) Co in Shanghai.

'China's domestic credit policy is relatively tight, which also reduced the inflow of foreign direct investment.' China said in December it would ease restrictions on foreign investment in some sectors while lifting caps on the proportion of foreign capital in others.

The announcement came after foreign direct investment in November registered the first year-on-year decline for a single month since July 2009.

At the same time, however, the government said it would 'withdraw support' for foreign investment in auto manufacturing to encourage the domestic industry in the world's largest car market.

Analysts said the move was unlikely to force global auto firms to leave the country, but it would make it harder for new foreign carmakers to enter. -- AFP


FDI from US companies plunged 26.1 per cent to US$3.0 billion.
European FDI down 3.65 per cent at US$6.4 billion.
FDI from Asian countries---- Hong Kong, Macau, Taiwan, Japan, the Philippines, Thailand, Malaysia, Singapore, Indonesia and South Korea combined rising 14.0 per cent to US$100.5 billion.


(BEIJING) Chinese banks are shunning loans to private companies with anything but the three highest credit ratings, forcing firms to pay interest rates as high as 9 per cent in the yuan- denominated bond market.


The companies are being penalised with yields at least two percentage points more than the official bank lending rate of 6.56 per cent, as banks restrict loans to riskier borrowers.

Five non-state companies rated 'AA-' or below have sold bonds for the first time, according to a report by China International Capital Corp, a Beijing- based investment bank. Sichuan Guangan AAA Public Co, an 'A+' rated electricity distributor, sold one-year bonds priced to yield 8.98 per cent this month.

'Small companies don't have access to the bank loans, and the banks don't have that much money available on the balance sheet,' Han Tong, co-founder of Shaun Brothers Investment Advisory, a Shanghai-based research firm, said. 'Eight per cent to 9 per cent on the bonds is really high.'

Companies are tapping debt while the government balances steps to curb inflation with efforts to stimulate the economy, after gross domestic product (GDP) grew at the slowest pace in 10 quarters in the last three months of 2011.

Concern that companies may default pushed the extra yield that investors demand to hold one-year 'AA-' rated notes rather than similar-maturity 'AAA' debt to a record high of 292 basis points, or 2.92 percentage points, on Jan 12. Yields on corporate debt in China graded 'AA-', the fourth-highest ranking, are equivalent to those for junk bonds rated below 'B' in the US.

'Getting bank loans is harder than before,' said Wei Jian, a researcher in the fixed-income department of Bosera Asset Management Co.

Borrowing costs for China's small and medium-sized enterprises (SMEs) have reached more than 12 per cent, National Development and Reform Commission vice-chairman Zhang Xiaoqiang said at a forum here last Saturday. Funding costs for the SMEs that are able to obtain loans are 30-50 per cent higher than benchmark rates, Mr Zhang said at the conference.

You must know by now, your piece goes to the core of the issue. Your lucidity leaves me wanting to know more. Just so you know, i will forthwith grab your feed to keep up to date with your site. Saying thanks is simply my little way of saying great job for a marvelous resource. Take On my dearest wishes for your incoming article.

You had provided us with a very useful information regarding the Chinese growing economy and the rapid market movement of every stock that is very competitive on today's market. Hope you will be able to share more financial updates like trader xp review www.tradersxpreview.com because I think you provide a good signal for all of us traders.

MasterCard closed up 3.91 percent after China said it
would open up its market to foreign firms for clearing
domestic bank card transactions.