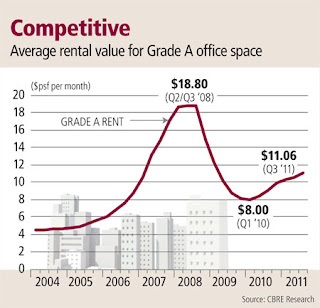 
predicts that the average monthly rental value for Grade A Raffles Place (excluding Marina Bay) will ease about 5.1-14.4 per cent over the next 12 months, from about $9.75 psf to $8.35-9.25 psf in Q4 2012. It also projects that the Grade A Raffles Place (including Marina Bay) office vacancy rate will rise from about 10 per cent this quarter to 12.5-13 per cent by end-2012, given a more bearish outlook on demand. Net office take-up for the same location will remain in positive territory in 2012 but weaken to 830,000 sq ft from about 1.75 million sq ft this year, according to JLL.

'Given Singapore's enhanced international value proposition, one would logically expect average annual take-up numbers over the next 10 years to be higher.

So the truth is that the medium and long term outlook is difficult to predict.
However, analysts are generally bearish on the short term outlook due to the Eurozone crisis.


Knight Frank .....
They appear to be the most pessimistic.
Director (office) Robert MacDonald says:


'The first half of 2012 will almost certainly see landlords increasing incentives (rent-free periods), and additional benefits to attract tenants, such as fit-out capital contributions, will become more common.'

'...headline office rents could contract by up to 15 per cent by end-2012. All eyes are focused on the European debt crisis and the resulting economic reaction, which will have a direct impact on market sentiment in Singapore. The extent of decline will be more transparent towards the end of Q1 2012.'

BT reported increased agent commissions from one month's rental to between 1.2 months and two months' rent on a typical two or three-year lease.
Another perk , reported by BT...
"landlord of a brand new Grade A office development keen to maintain high headline rental levels in the building is said to be prepared to offer a 5-6 month rent-free period for a 2,500 square foot space - from 1-2 months half a year ago."
Mr MacDonald notes that new-build Grade A rents in Singapore are 45 per cent lower than comparable developments in Hong Kong.


'Landlords will have differing reactions in a more competitive leasing environment. Some may wish to increase incentives or inducements while preserving face or signing rents, while others may just allow signing rents to adjust to the prevailing market level.'

CBRE figures show that the average monthly rental value for Grade A offices - covering the Marina Bay, Raffles Place and Marina Centre locations - has been flat in Q4 from the Q3 figure of $11.06 per square foot, translating to a full-year rise of 11.7 per cent. This follows a 22.2 per cent appreciation in 2010.

Mr Armstrong foresees Singapore office rents easing next year but does not expect any dramatic rental correction as was seen post-global financial crisis, when the average monthly Grade A rental slumped nearly 60 per cent over six quarters, from $18.80 psf at the peak in Q2 and Q3 2008 to $8 psf in Q1 2010.

'Rentals going into GFC were at artificially high levels, driven by extraordinarily low vacancy rates of sub-one per cent for over two years. This accentuated the rent correction. These conditions don't exist today; rentals are manageable and relatively competitive compared with other regional centres.'

Mr Armstrong expects office demand to remain positive in 2012. 'While there are precious few leasing requirements in the key banking sector - where the growth spurt appears to be over - we're encouraged by a number of new entrants coming into Singapore from a few sectors (such as) in the energy, commodities and consumer industries, and law firms.

'We've seen some initial signs that certain global industries are viewing Singapore favourably for expansion, partly due to uncertainty in the West arising from prospects of increasing taxes and an uncertain political landscape. Singapore could emerge a net beneficiary.'


'Tenants may want longer leases and more options for renewal as they seek greater security of space - and yet due to uncertain business conditions, they would also like some flexibility in the lease agreement that the landlord will consider taking back some of their space should they no longer need it, with an agreed compensation formula.'

In the immediate near term, most experts tend to be cautious--- to be pessimistic.
CEO of KReit, Ng HL has to be very brave (or reckless? ) to call the timing and nudge Kepland to release OFC to KReit , during such a period of uncertainty.
Posted by qiaofeng at Thursday, December 22, 2011