In the coming days, The Eurozone will again be the focal point....

Take  a look at the 10Yr Govt Bond Rates of  Eurozone countries (courtesy of Der Spiegel and Thomson Reuters).
See how the bond rates have converged after the monetary union---offering the kind of stability needed for the EU (including the integration of East Germany) to grow and prosper in the last decade with stability in the member countries bond rate. 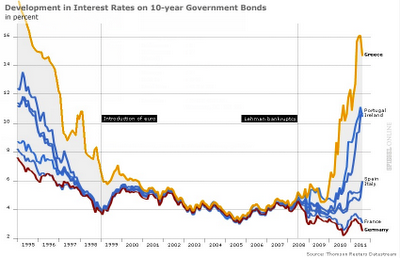 But, the flaw of a monetary union w/o  a political union has now been discovered by bond vigilantes and the fabric is tearing and unravelling---- in the form of a Sovereign Debt Crisis or what some call the Eurozone Crisis.
With the onset of the crisis, these rates have become  unsustainable.

The politicos in the Eurozone countries know that some thing must be done to solve this conundrum, the question is what can they possibly agree upon......

Option One
Bilateral on-loans thru IMF
The ECB under Trichet and now Mario Draghi has been reluctant to lend ( thru bond markets or bailouts) to countries like Italy and Spain, citing moral hazard. It has also been reluctant to allow itself to be leveraged by the EFSF by acting as a lender of last resort, aka print money ----again citing moral hazards (as profligate countries will be let off the hooks and the taxpayers of the core like Germany will be left to handle the consequences associated with a weaker Euro i.e. higher long term bond rates).

Neither are they willing to buy Italian bonds of which 10yr rates are at close to 7% (making Italy’s debt financing unsustainable).

Now the talk is IMF involvement. But given the IMF’s small coffer ---- currently, the IMF has USD 389 billion (291 billion Euros) available to lend to its member countries----this may NOT be the bazooka, to shock and awe the bond vigilantes. So the talk now is to use “bilateral loans”------CBs (Central Banks) from Eurozone member countries OR even the ECB itself, loaning to the IMF (yes U read it right) and then allowing the IMF to on-loan those monies to the peripheral countries like Italy and Spain, under the IMF’s strict fiscal probity conditions. In this way, moral hazard is avoided.

Option Two
Fiscal Union thru Treaty changes in Eurozone
After talks with Sarkozy, Merkel is now pushing for Fiscal Union in the German Parliament. This is the inevitability that I have long forecasted.

Well, in essence Fiscal Union will necessitate treaty changes.
W/o Fiscal Union (i.e. treaty changes), Merkel cannot answer to the Germans (Parliament and People) for any decision to allow the ECB to be used as a leverage for the EFSF. Any bailouts ----in fact, any help to the peripheral countries like Italy or Greece---- will come with moral hazards. Leaders like Berlusconi (previous Italian PM) could just renege on their vague promises for austerity w/o consequences.

Countries like Britain (Cameron faces challenge from his Conservative base) may resist any such treaty changes to the EU thru the EC. So, if there are deep seated objections, the treaty changes may just be limited to the 17 Eurozone countries, NOT the 27 member EU.

But, CBs can buy time for Fiscal Solutions.

By allowing the crisis to roil and boil, Merkel has created the urgency and the need for action. The 17 member states of the Eurozone and the electorate in each of them knows that the monetary union is at the precipice. It would breakup and fall off the cliff w/o an accompanying fiscal union. The will and the justification for that change is there; past debate.

But, we can see 3 interesting scenarios that have emerged with regard to CBs actions:-

But with the hawks like Plosser, Lacker and Fischer calling for a stop to such easing; pointing that such liquidity measures cannot replace fiscal measures and will lead to massive inflations, if not properly managed. Operation Twist involves NOT just changing the mix of the type of Treasurys (in terms of length of maturities) but could also involve large scale re-investment into Housing MBS, to drive mortgage rates down. This is tantamount to the FED venturing into Fiscal Policies, which Plosser has warned ---- “ he would oppose such a plan, which he sees as crossing the line into fiscal policy since it represents de facto credit allocation to a specific sector.”

3) The question now is what will the ECB under Mario Draghi do?

The lastest PMI results, I have posted all shows the Eurozone contracting; both the core and the periphery!!

Under Trichet, the ECB acted to lower bond rates in the peripheral countries like Italy but, any such buys were sterilized, so as NOT to be inflationary in nature.

Draghi has been very careful with his bond buying, signaling that there were moral hazards and until the politicians sort it out--- the ECB will not get involved in a BIG way.

The signals are that Draghi will act decisively only if  moral hazard is removed with a firm road map to Fiscal Union via treaty changes.

So what the ECB do will depend on the outcome of the Merkel-Sarkozy Summit, today and the crunch Brussels Summit; in the coming days to forge that Fiscal Union.

Option One is probably the fall back Option, should Option Two fail.

But the situation has become so dire that given the stakes involved, the Fiscal Union Option might just be pushed thru; allowing Draghi and the ECB to act.
Posted by qiaofeng at Sunday, December 04, 2011

IMF MD Christine Lagarde is seeking to raise its lending capacity by USD 500b.

The Washington-based lender currently has about $385 billion available to lend and wants to lift that to $885 billion after identifying the potential for a $1 trillion global financing gap in the next two years, the person said. To incorporate a cash buffer, that means asking its membership for $600 billion.

The Washington-based lender is pushing China, Brazil, Russia, India, Japan and oil-exporting nations to be the top contributors, according to a Group of 20 official, who spoke on condition of anonymity because the talks are private. The fund wants the agreement struck at the Feb. 25-26 meeting of G-20 finance ministers and central bankers in Mexico City, the official said.


What about US and Germany , key members of the IMF and wielding great influnece in the Euroland crisis?


"A U.S. official reiterated that stance last month, saying President Barack Obama’s administration won’t stump up more cash for the IMF and that a solution to the turmoil must be led by Europe."


" Germany’s Bundesbank coupled its 41.5 billion- euro input to a promise that the aid not be earmarked for Europe. Such recycling would violate euro rules that bar central banks from financing government deficits. As a result, the euro area will lend to the IMF’s general resources, not to a special crisis fund."


IMF wants the agreement struck at the Feb. 25-26 meeting of G-20 finance ministers and central bankers in Mexico City.