Savills did a study of High End Deals in the Housing Market and this was reported by  KALPANA RASHIWALA in the BT,  in an article "High-end home deals fewer this year: study" , on 5/12/2011.


﻿
Non-PR Foreigner share in the high end condos in choice districts  and bungalows in Sentosa have increased according to Savills; said the BT article.

Breakdown by Nationality
From BT
Reasons?
1) Chinese fleeing restrictions on property buying in their home market and instead parking their monies in Singapore's property market.

2) Investors fleeing the economic gloom in Western economies  to favour the relatively healthier economies in Asia.
3) Singapore is seen as a property buying destination in Asia for its transparency, political stability and relative safety----AAA rating in the eyes of these HNWIs.


Who are these buyers ?

Breakdown by Country
From BT
High End Apartments for Jan-Nov 2011
Indonesians
Have been the top buyers since 2007---- Up from 15.4 % in full-year 2010 to 16.4 % during Jan-Nov 2011. However, the 236 upmarket apartments/condos they have bought this year is about 35 % lower than the total number of caveats last full yr.
Mainland Chinese
Their share of total buying doubled from 5.8 per cent to 11.8 per cent.
Their purcahses of of high-end apartments has risen from 136 for full-year 2010 to 170 in Jan-Nov 2011
Indians
They were the fourth largest foreign buyers of high-end apartments in Jan-Nov 2011, with 31 caveats or a 2.2 per cent share of total purchases.

A longer-term comparison reflects a similar picture. The number of high-end apartments bought by Indonesians has roughly halved from 438 in 2007 to 236 in Jan-Nov 2011, while the number of caveats lodged by mainland Chinese has quadrupled from 43 to 170.

Sentosa Cove for  Jan-Nov 2011
Chinese are the biggest foreign buyers (PRs and non-PRs combined) of bungalows.
They purchased five of the total 20 bungalows transacted in Jan-Nov this year.
Singaporeans bought eight bungalows.
Non-PR foreigners have 35% of th share of purchases.
Average price of bungalows transacted on Sentosa Cove has risen 11.1 % from $1,910 psf on land area for full-year 2010 to $2,122 psf for January-November 2011.
In absolute dollar quantum, the average price per bungalow transaction has appreciated 7.7 per cent from $17.1 million to $18.4 million.
The total number of Sentosa Cove bungalows transacted has slipped from 54 last year to 20 in Jan-Nov 2011. 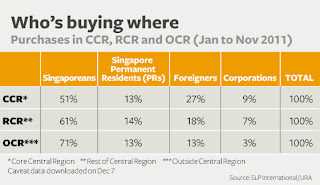 Breakdown by Region
From BT
My Thots.....
As long as SG remains an open economy, HNWIs will continue to invest in high end properties here.
Note, that Non-PR Foreigners need approval to buy landed properties outside of Sentosa.
Posted by qiaofeng at Monday, December 05, 2011