BERLIN—The central banks for the U.K. and the euro zone scrambled to inject new life into their fading economies, both acting Thursday to try to stave off recession or a credit crunch while awaiting the next moves of the region's embattled governments.

The Bank of England made a surprise decision to buy government bonds to try to bring down interest rates and spark growth, while the European Central Bank revived measures from last year to try to keep capital flowing to Europe's ailing banks.

"This is the most serious financial crisis at least since the 1930s, if not ever," U.K. bank chief Mervyn King said, explaining the decision to add money into the strained financial system. "We're creating money because there's not enough money in the economy."

A flurry of meetings by global policy makers in recent weeks has done little to inspire confidence that a permanent fix is in store for Europe's beleaguered periphery, and economic indicators in recent days have offered fresh signs that Europe risks sliding into another recession. France's statistics agency Thursday predicted recession for Spain and Italy by year's end, saying that would help drag France's growth to zero.

German Chancellor Angela Merkel met Thursday in Berlin with the heads of the International Monetary Fund, the World Bank, the ECB and the Organization for Economic Cooperation and Development. The leaders warned that the global economy, while on a path of recovery after the financial crisis, could now enter a phase of even greater danger, and Ms. Merkel noted they had agreed that capital controls should be used as a last resort.

Jean-Claude Trichet, at his last meeting as ECB president before handing the reins to Mario Draghi, again criticized European governments for failing to do more themselves.

"Governance has been insufficient," Mr. Trichet said, repeating a complaint he has increasingly made in recent months. "We cannot substitute ourselves for governments," he added.

The U.K. move to engage in more quantitative easing, or government-bond purchases, was particularly noteworthy, because economists hadn't expected such a decision for at least another month—a reflection of how much ripples from the widening crisis over Greece's debt are worrying policy makers outside the euro zone. This week Greece is expected to finish talks with the "Troika" of creditors—the IMF, the ECB and the European Commission—as the concerns that began two years ago with Athens now threaten Europe's largest economies.

The ECB didn't take a bolder step of lowering rates, though some of its governing council members pressed for that move and were outvoted. The ECB doesn't release vote tallies, but Mr. Trichet said the decision was taken by "consensus"—ECB code for several dissenting votes. The ECB kept its main interest rate at 1.5% for a third straight month, after raising it in increments in April and July. 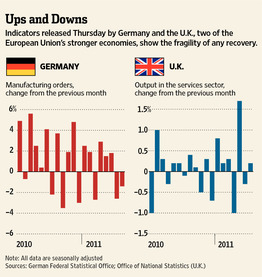 But the bank's moves on lending programs for banks reflect the lengths to which it is going to boost Europe's financial institutions. Many analysts say such action is critical if the currency bloc is to survive the debt crisis.

The ECB voted to make longer-term loans available to banks later this year for maturities up to 13 months, ensuring banks have unlimited financing into 2013 as long as they can post collateral. Starting next month, the ECB also will buy €40 billion ($53 billion) in bank bonds backed by mortgages and other assets, known as covered bonds, a key source of funds for banks.

"The economic outlook remains subject to particularly high uncertainty and intensified downside risks," Mr. Trichet said. Officials "had a long discussion…on the pros and cons of decreasing rates or leaving rates where they are," he said.

Mr. Trichet leaves the ECB at the end of the month with the euro zone on the cusp of recession; inflation at 3%, a three-year high; commercial banks groaning under the strain of exposure to Greece and other highly indebted euro-zone governments; and an ECB that is divided on how to respond. Neither the financial-market turmoil nor the economic outlook for the 17-nation euro zone are likely to improve in the near term, which the ECB acknowledged by extending its emergency support programs for banks into 2013.

The Bank of England decided to revive its asset-purchase program, known as quantitative easing, by purchasing an additional £75 billion ($116 billion) in government bonds, on top of the £200 billion it has already bought. "The ECB has got more scope to act than the Bank of England, but clearly the Bank of England has been prepared to take more risks" to stimulate its economy, said Howard Archer, economist at IHS Global Insight.

On the surface the move seems designed to soften the effects of the U.K. government's austerity program, which has raised some questions over whether it goes too far. The U.K. Treasury also is planning to buy billions of pounds of corporate bonds issued by small and midsize companies to free up capital for struggling firms unable to tap banks for loans, but said that doesn't amount to backing off austerity plans because the program won't add to the U.K. deficit.

Separately, the European Banking Authority said Thursday it can't rule out launching a new round of stress tests for Europe's banks. Politicians and central bankers have been increasingly outspoken in recent days on the possible need for a forcible recapitalization of Europe's banks.

Ms. Merkel reiterated Thursday that if needed, state help should be granted to recapitalize banks. "The damages that arise otherwise would be much greater in scale," the chancellor said after the Berlin meeting.

The euro-zone economy grew at an annualized rate of just 0.7% in the second quarter, and probably didn't fare better in the third quarter. Data published Thursday showed German manufacturing orders fell 1.4% in August compared with July, adding to indications that growth is faltering in Europe's biggest and, recently, its strongest economy.

Recent data have suggested the U.K. is also at risk of falling into a recession. However, Britain's statistics service said Thursday that output in the dominant services sector grew 0.2% in July compared with June, a modest increase that economists said lessened the chances that the economy was already contracting in the third quarter.

—Jason Douglas contributed to this article.

The CBs are buying time while their govts get their acts together.
Posted by qiaofeng at Friday, October 07, 2011

Did you consider using the ultimate Bitcoin exchange service: YoBit.

YoBit enables you to claim FREE COINS from over 100 unique crypto-currencies, you complete a captcha once and claim as much as coins you need from the available offers.

After you make about 20-30 claims, you complete the captcha and continue claiming.

You can click on claim as much as 50 times per one captcha.

The coins will stored in your account, and you can exchange them to Bitcoins or any other currency you want.