This article by Grace Segran appeared on Today , on 25/11/2011.
Those who follow me on the CNA Forum will know that he is one of my fave commentators on China. 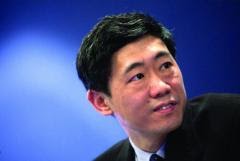 By all accounts, the Chinese economy is thriving. While America and Europe continue to struggle with debt and unemployment, China is moving from strength to strength. Still, Chinese economists and policymakers are looking ahead to see what problems China may be facing in the not-too-distant future and, more importantly, how to prevent or mitigate them.

For a start, Professor David Li Daokui (picture), a     member of the Monetary Policy Committee of the People's Bank of China and the director of the Center for China in the World Economy at Tsinghua University, believes that China is heading into a major grain shortage.

China already has a very limited amount of per capita arable land, he told INSEAD Knowledge. However, as China industrialises and urbanises, labour costs are rising quickly. These costs will be capitalised into the price of agricultural products such as grain. The Chinese consume grain in very large quantities - not just whole grains but also as raw materials for the production of other food items. Together, these factors are leading to a perfect storm that will result in an increased demand for grain.

The increase in demand for grain is a global problem, according to Prof Li. It would only take one bad crop to throw the world into a major food shortage. "We can imagine that, with the frequency and severity of natural disasters in China as well as in other parts of the world, the overall global grain output will be decreased, which will pose a potentially grave threat to grain security, leading to worldwide food shortages and resulting in global inflation in food prices," he says.

He opines: "This will not only work towards China's self-interest but will also contribute to helping to solve the wider global grain supply problem."

OIL MARKET FLUCTUATIONS
Prof Li predicts that, like grain, there could be a global shortage of oil that could adversely affect China's development. However, he points out that oil and grain are different kinds of resources.

"The risks associated with oil and grain are different, as the geographical supply of oil is relatively concentrated," he says. "Oil responds much more dramatically to changes in the global economy. The downturn in the European and American economies has depressed the price of oil. However, even a small economic recovery could cause an upward surge in oil prices."

Since China is dependent on external oil supplies, a dramatic increase in oil prices could be devastating to the Chinese economy. In Prof Li's view, China must be prepared for these possible fluctuations by building a domestic supply of crude oil equivalent to three to six months of domestic consumption. China should also diversify risk factors by establishing long-term contracts with countries that supply oil and begin to rely on other energy sources.

EXCESS CASH SUPPLY
Over the past three decades, China has experienced a steady increase in its supply of money. It now has an overall money supply of US$10.5 trillion (S$13.7 trillion), which is higher than that of the United States and is equivalent to nearly double its gross domestic product.

Prof Li explains that this excessive circulation of cash presents many risks for the Chinese economy. Without viable options to invest this money, asset price bubbles could develop and the prices of certain assets could climb. "We saw this in the housing market bubble in the US ... When asset prices reached unsustainable levels, the bubble burst, causing a nationwide economic meltdown."

Prof Li suggests that China shifts its monetary policy to reduce the amount of money circulating in the economy. He says: "China should tighten its supervision on financial institutions to control systemic financial risks in this sector and prevent excessive price increases."

China could also let excess capital flow out of the country, by allowing companies and individuals to convert their yuan into other currencies. Eventually, these measures should facilitate a two-way flow of capital, allowing China to regulate the flow of money into and out of the country.

On the whole, the Chinese economy is in good health, Prof Li asserts. Still, it is vitally important not to underestimate the risks that, if left unchecked, could devastate China and undo years of economic progress.

This article first appeared in the latest issue of INSEAD Knowledge. David Li Daokui, who received his doctorate in economics from Harvard University, is Mansfield Freeman Professor of Economics and part of a trio to replace Fan Gang as academic members to the Chinese central bank's monetary policy committee.
Posted by qiaofeng at Friday, November 25, 2011